June 27, 2016
On Tuesday June 21, The STEMpunks, Tom, Christie and Shane hosted a STEMpunk quiz at Wayward Brewery in Annandale, Sydney. It was a huge success with a great crowd, and a great vibe.

We had so much fun at the very first STEMpunk quiz with Christie McMonigal, Shane Hengst, Vanessa Moss, Stephanie Wood, Marc West & Eliot Redelman. Thanks also to Wayward Brewing Company. Massive thanks to all involved!

Congrats to Team Christie for winning the event, and to all for everyone in the audience for participating.

We had a great time and we're looking forward to doing it again on Tuesday July 19 at Wayward from 6:30-8pm. To book tickets for the next STEMpunk quiz, please go to the eventbrite page here: 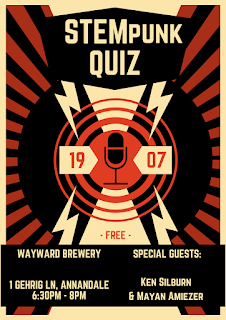 Here are the questions we asked in the quiz:

S - Science
- What is a Syzygy? And how much is it worth in Scrabble
- Journal or joke?
IJ-ISME
J-ERC
PNAS
JIM
- How many times did Pluto make it around the sun between its discovery in 1930 and when it was declassified as a planet (in 2006)?
- Gene name or band name
Casanova
Split ends
SHH Sonic hedgehog
Rolling stones

T - Technology
- If a driverless car is at fault in an accident with another vehicle while driving, who takes the blame?
- What was the name of the drone ship for the SpaceX rocket that landed itself on April 8 2016?
- What is shmeat?
- What is special about the band Compressor-head?

E - Engineering
- Who of the following have a degree in engineering. Megan Washington, Rowan Atkinson, Harper Lee or Dr Karl, or Dr Karl (the one from neighbours).
- Of the 12 people who have walked on the moon, how many have degrees in engineering?
- According to the flying pickets, who wants to be an engineer?
- Engineering records
The least dense solid?
Smallest jet engine?
Longest carbon nanotubes
Most northerly solar powerplant

M - Mathematics
- What are Natalie Portman’s ad Carl Sagan’s erdos-bacon number.
- Which is incorrect. PEMDAS, BODMAS,  DUMBAS or BIDMAS
- What is the sum of the first 6 prime numbers, and is that number a prime?
- Where would you find a clothoid loop?

Tom interviews international STEM superstar Scott Daniel. Thanks so much to Scott for chatting with us. Scott has been involved in Science communication and education for over a decade and has been doing it all over the world.  Scott has a regular science spot on ABC Gippsland, and has developed a huge range of resources and research into science education and communication.

Ever since starting this podcast, I've wanted to interview people like Scott. I hop you enjoy this as much as I did talking with Scott! 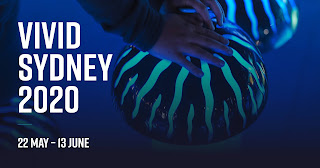 STEMpunk was given an incredible opportunity, to run an event for the Vivid Ideas festival called Significant Figures, where we interviewed a wonderful scientist with a panel or more excellent scientists, or significant figures!

The panel of significant figures, Ivy Shih, Corey Tutt and Kirsten Banks, was to interview through games and questions, a mystery science guest, Associate Professor Tanya Latty from the University of Sydney,

But we ran it anyway!!
Huzzah!!

...and this episode is that panel show, but instead of live, we did it online. Same people, same concept, just no live audience. This worked incredibly well. So fun, so learn, and so....ewwwww!

Thanks to the amazing Ivy, Corey and Kirsten, andof course Tanya Latty. You are all wonderful.